The lakes of the Orient forest, located near Troyes, less than 3 hours from Paris, are famous for pike fishing! Cedrick Plasseau, fishing guide, and his friend Benjamin, spent an opening week fishing for pike, looking back on their week full of emotion! 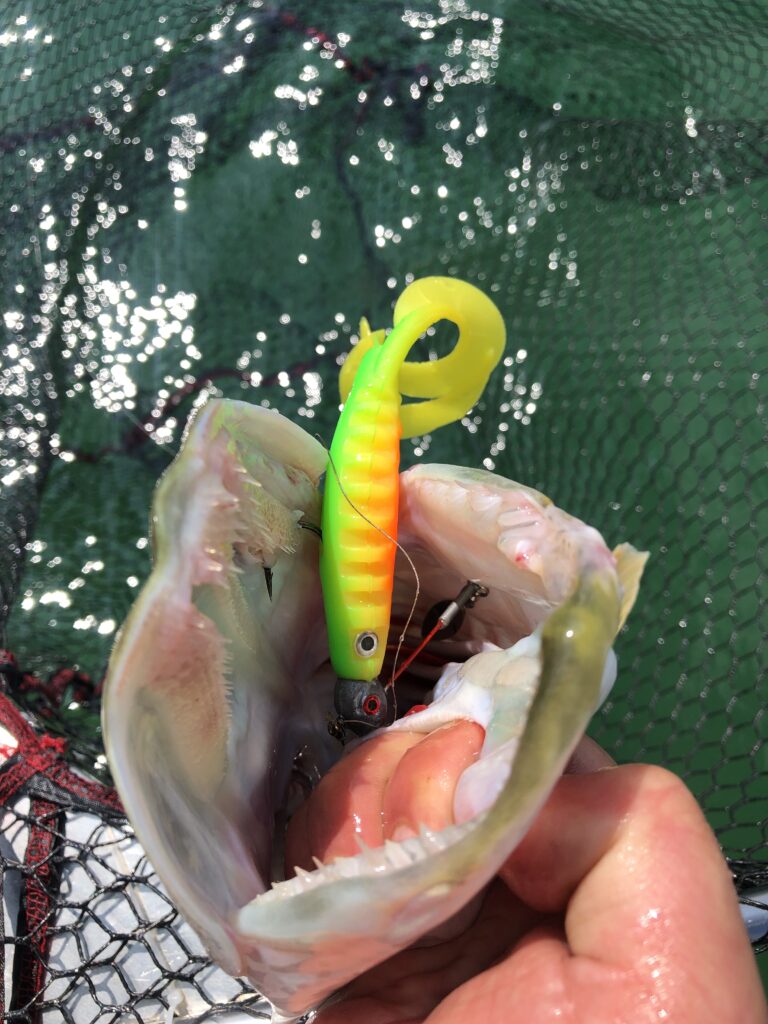 A complicated first day of pike fishing in Orient:

As often, the first day of pike fishing is not easy, you have to locate the fish, get back to your hooking up and fight management habits, etc… Cedrick and Benjamin were no exception to this rule.

Indeed, despite the sun, the first day was quite cool, with a light northerly wind. The first throws of the season will be on border areas between 2 and 4m deep. After losting a rather modest fish in the early morning, Benjamin decides to take advantage of the early afternoon sunshine to send more flashes of light. He equips himself with a Neo Frog fire tiger which he mounts on a pro flex jig head.

After a few casts with this assembly, the first pike of the season comes to join the landing net, a modest fish of 65cm but which is fun, and which perhaps offers the pattern to our two fishermen! Indeed, an hour later, it’s a second fish, bigger this time, which comes with the Neo Frog + Tp pro flex assembly!

An effective lure for pike in Orient?

In the following days, the conditions are quite similar and Benjamin continues his prospecting with the Neo Frog, like all fishermen, the sequence of a few fishs in difficulty allows to increase the confidence in a lure or an assembly!

This trust will bear fruit with a magnificent fat fish over 80cm for each of our two fishermen in less than 2 hours, the size of the fish increases, to the delight of our fishermen! 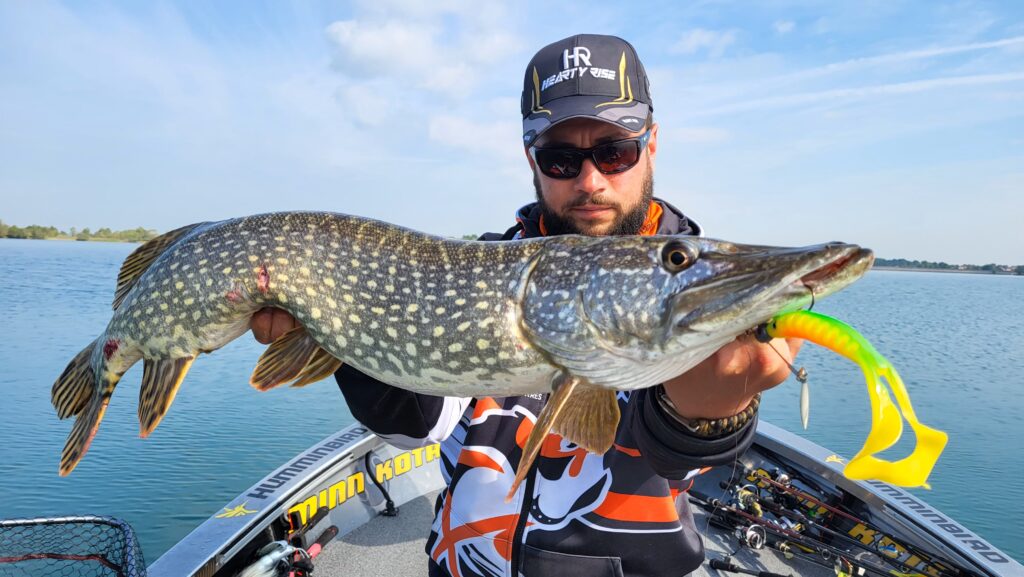 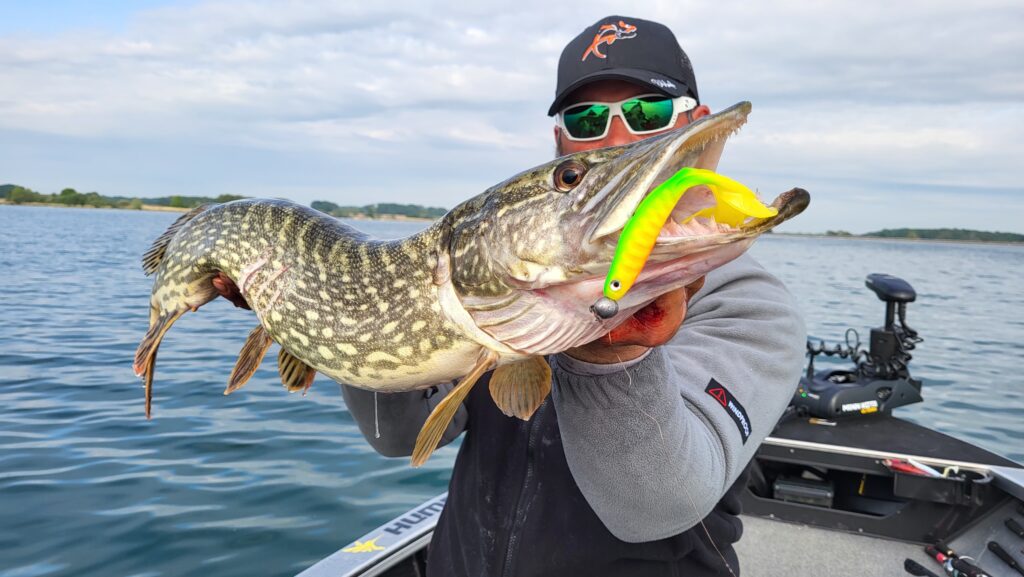 After a well-deserved lunch break, the beginning of the afternoon was quite calm, with only one or two followed by small fish, when suddenly, big bite! Hooking up in the rules of the art for Benjamin who immediately announces a big fish! The fight is heavy, the fish is taking a long time, the first meter over of the season is perhaps at the end of the line! After a few rushes, the fish finally breaks the surface and Cedrick gently exhausts it! A superb fish, slim thin after the spawning period but which displays 101cm on the height gauge! A photo to immortalize the moment and this beautiful pike went back to feed in the seagrass! 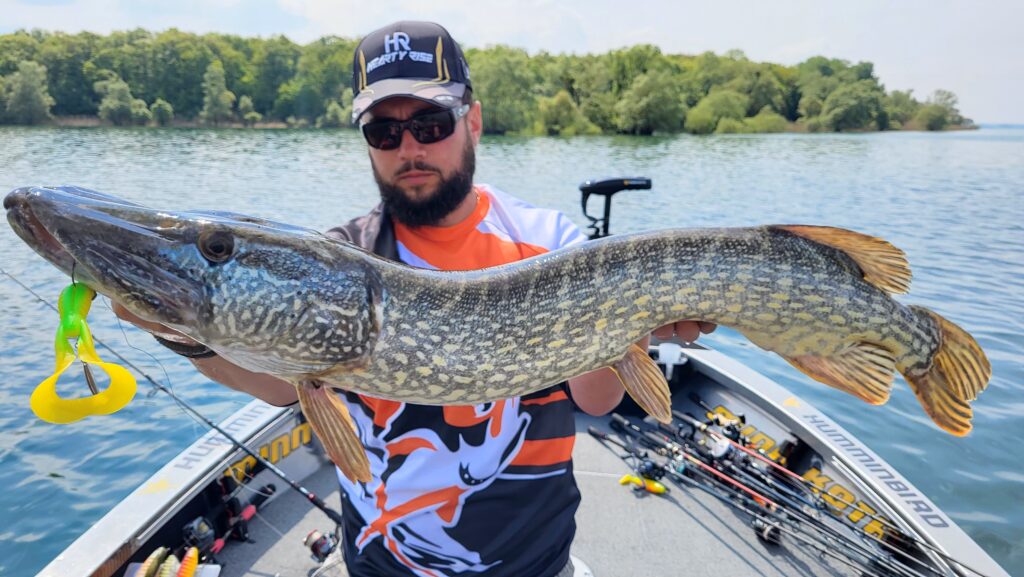 A change of pattern with the arrival of the wind!

The following days the wind intensifies slightly and our fishermen decide to sweep deeper areas, between 4 and 8m to see if the fish are not beyond the breaks! For this slightly deeper exploration, the new Neo Swim is ideal and after only a few casts, the first bites are felt, several small fish, between 50 and 65cm, are caught in a short time. The fish seem to be active for 1h / 1h30 from time to time, then don’t want to know anything for long periods… Real peaks of activity during which you have to stay focused to try to catch fish!

The area having only given small fish, Cedrick and Benjamin decide to change spot, but always on a similar configuration, namely a break between 6 and 8m deep, and always at the Neo Swim to move a lot of water and remain easily identifiable by pike despite the wind! 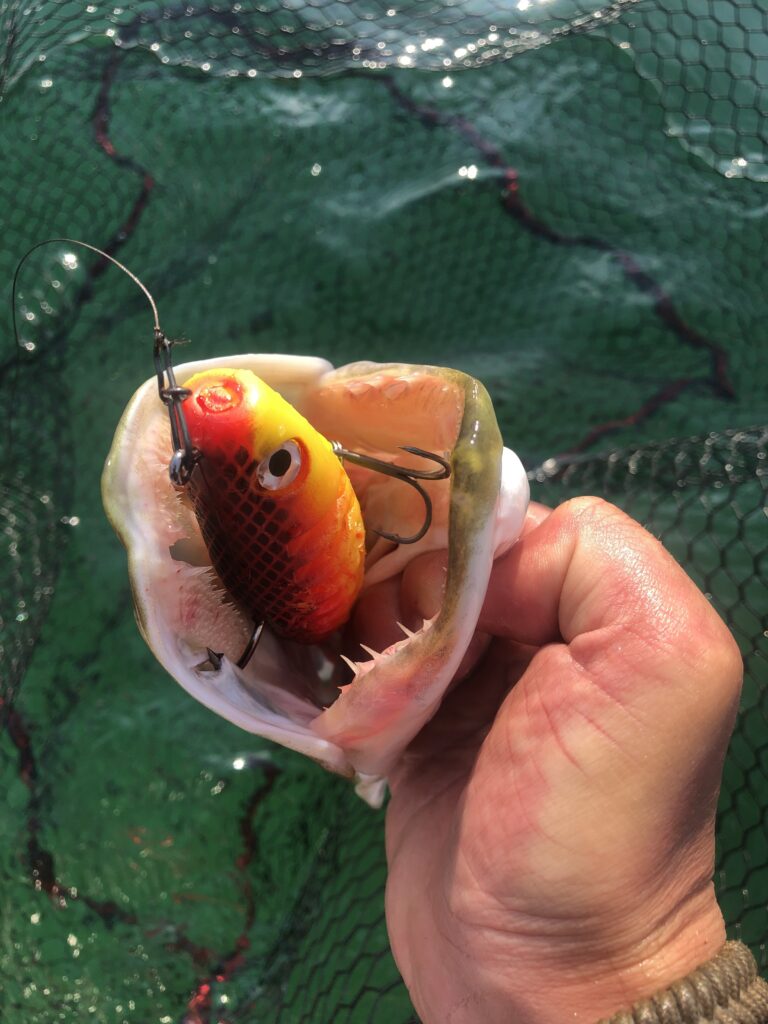 On this new spot, baitfishs are very present and the first touches are not long in coming, with a first correct fish for Benjamin thanks to the Neo Swim Natural Dark Night!

After a short period of calm, during a very distant cast, Cedrick feels his braid stop while his lure was going down, reflex hooking and it’s a magnificent pike stung thanks to the Neo Swim’s triple hook ventral ! Downstroke attacks are often stealthy and unobtrusive, requiring anglers to stay focused throughout sessions!

Congratulations to Cédrick for this superb pike from the Orient forest! 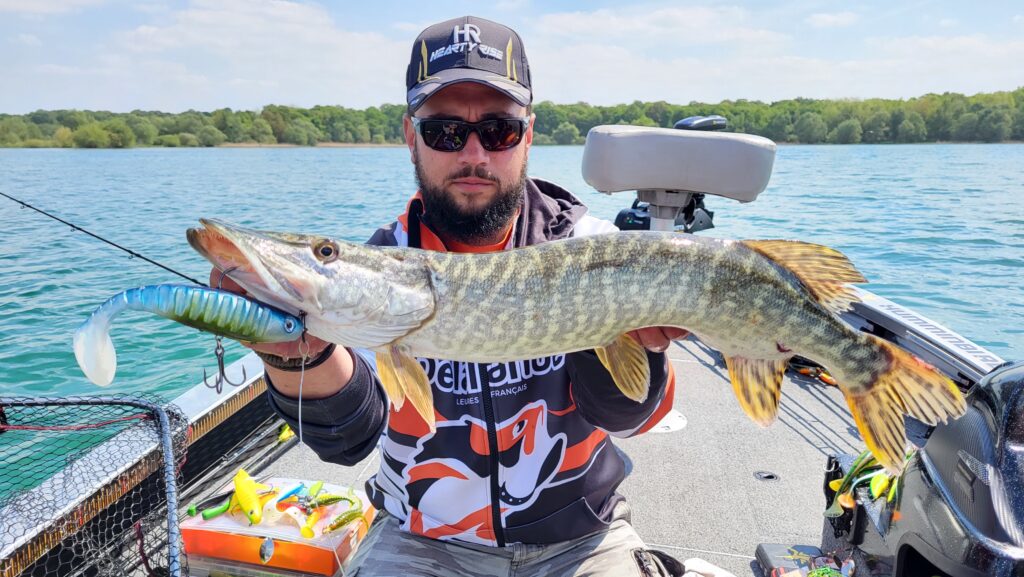 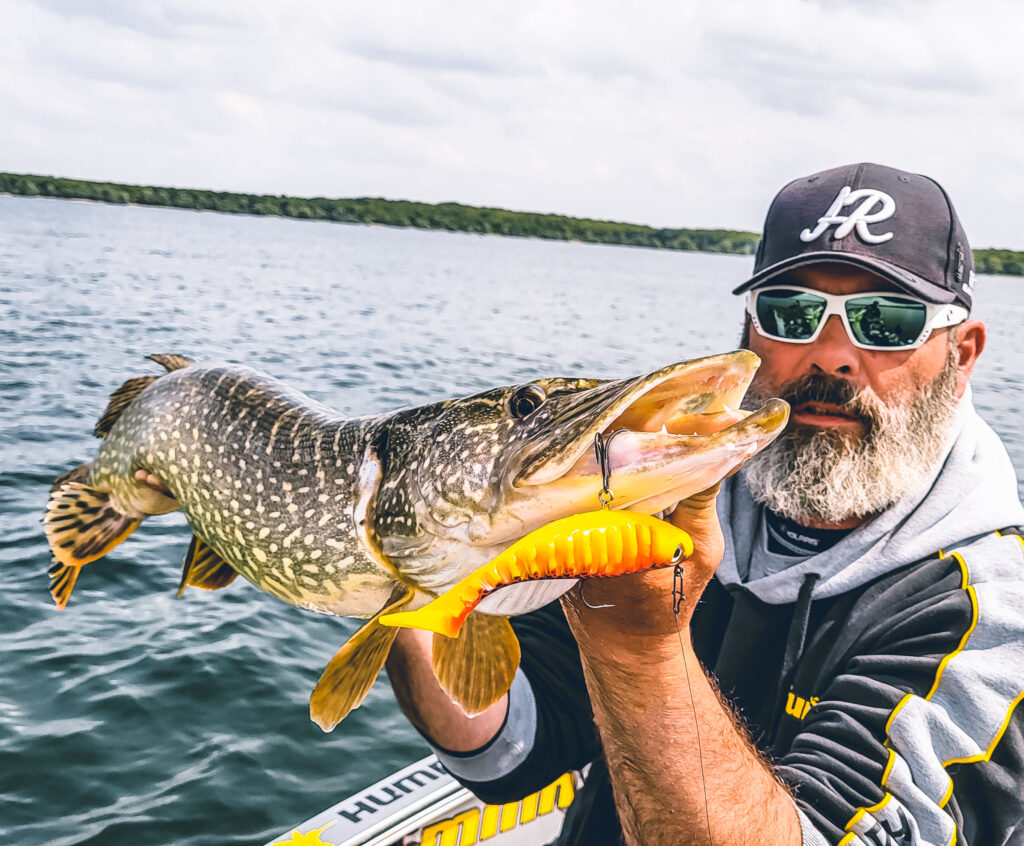 How to animate the Neo Swim for pike fishing? 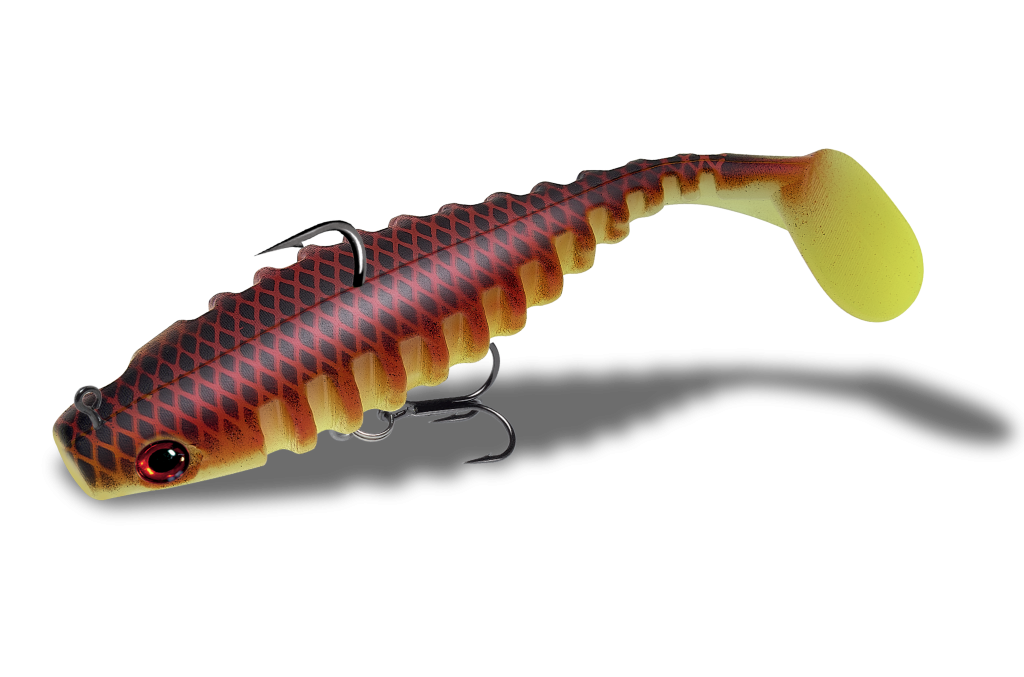 For the animations, the fish were all taken linearly at 1 or 2m above the bottom. A cast far enough along the break, a controlled descent to prevent bites at this time, then a fairly slow linear recovery by holding the rod high so that the lure swims flat. The large volume of Neo swim allows you to move a lot of water for a lure of “only” 16cm, which makes it particularly identifiable by predators! It also has a big rolling that helps unleash attacks easily!

A last big pike for the road : 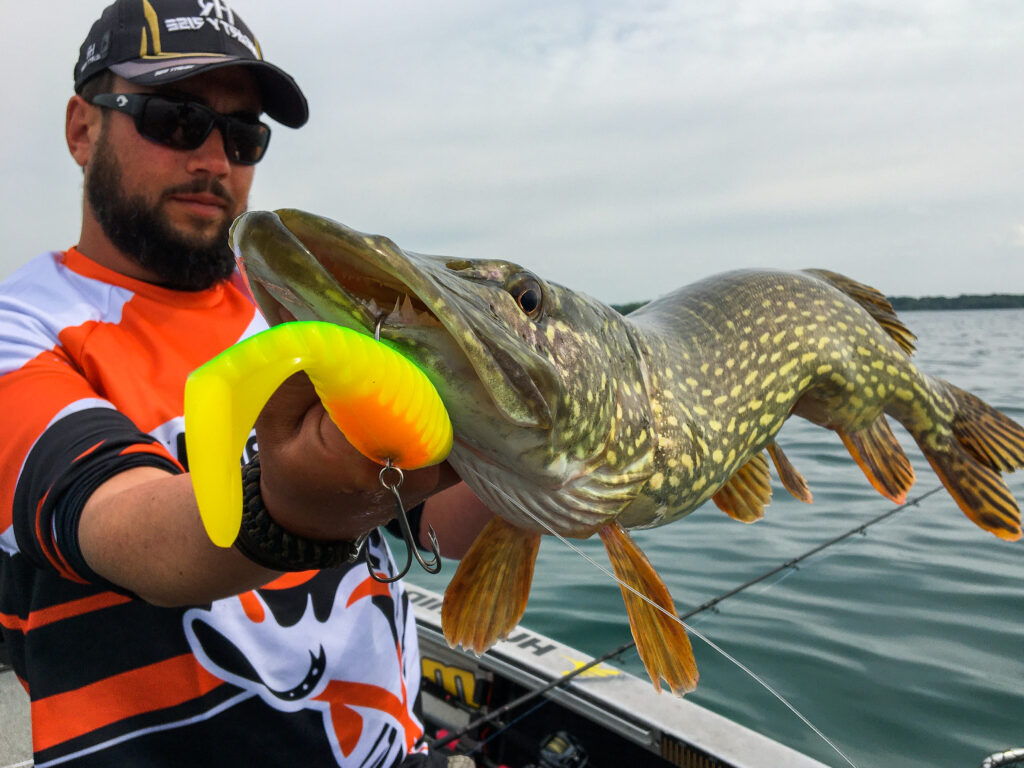 During the last evening shot, the overcast sky and the low light prompted Benjamin to switch to a color that greatly reflects the ultraviolet rays: the Fire Tiger! After a good half hour of insisting around an area filled with baitfish, what will then be the last touch of the stay on the lakes of Orient arrives! And what a touch! A real “stop” during a slow recovery above the bottom! After a good strike, the fish holds the bottom, it’s still a nice pike! After a few minutes of intense but well-controlled combat, this pike with its dress and magnificent proportions will come to close this week of fishing in the Orient forest. 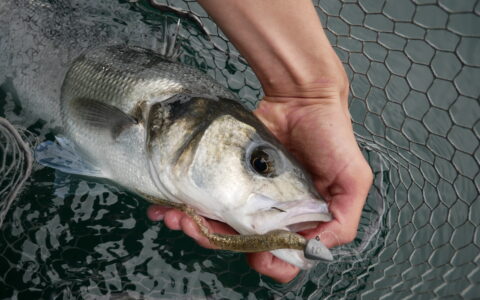 Seabass fishing on the edges with Marc and Félix

A little boat with a small engine, rods, softbaits and our two young fishermen Marc and Félix go seabass fishing on the edge of southern…